The Eye of Nazar, or the so-called Blue Eye, is one of the most significant and recognizable symbols of our day. Chances are minimal that you haven't heard of it or met it at least once. In many cultures, it is believed that one unkind glance is enough to overturn someone's luck. Nazar jewelry and charms are designed to prevent something like this from happening.

Before we continue, it is important to note that in order to gain insight into the meaning and origin of the symbol, you must clearly distinguish between the Evil Eye, which is the curse itself, and the amulet that serves as protection from it. The possessor of Nazar most often wears the symbol in the form of a jewel. The amulet can also be spotted as a home, office or car accessory. 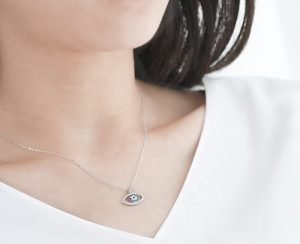 Although quite often the amulet itself is referred to by the masses as the Evil Eye, it actually serves precisely to protect us from the curse that could befall us. The Eye of Nazar has been known to mankind for millennia. It is believed that the curse is much older than this amulet, and that its roots are much harder to trace. This evil stems from the concept that people who do well personally and manage to succeed in one way or another often attract the envy of others around them. The malevolent gaze and insidious thoughts of these people manifest as a curse that could bring misfortune and bad luck to a person, even without them suspecting it.

In different parts of the world, you may encounter a variety of variations to ward off evil eyes and forces. The most common and well-established of these is the wearing of jewellery with the Eye of Nazar. A little further we will provide all the necessary information about this superstition and talismans against evil forces.

The amulets are most often made of blue beads containing concentric circles in white and blue, which depict the eye itself. Beliefs suggest that by depicting the symbol on an amulet, it reflects evil intentions, returning them to the person they came from. 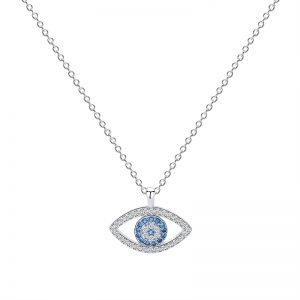 What is the meaning of the word Nazar and where does the symbol come from?

The word Nazar means "sight", and the symbol itself originated in a small village in Turkey, from where it spread around the world. However, the Eye of Nazar dates back to around 3000 BC and quite a few sources link it to ancient Egypt. Around 1500 BC, the Nazarene was also known as the Nazarene. B.C., glass production became more sophisticated, and with it gradually appeared the first forms resembling today's beautiful amulet.

People believed that the eye of god Osiris had protective powers, and hence the whole idea of the benevolent Eye of Nazar. It is an interesting fact that the primary color that Nazar was found in back in ancient Egypt was blue. This was due to the high levels of oxides in the Egyptian mud, which took on this color during the glazing process. At a later stage, the Turks began to use blue beads as they in turn associated this colour with their sky god Tengri. The beads remain as a permanent element of the image of the Eye to this day. 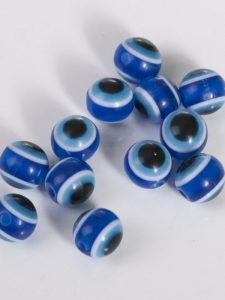 Where does the legend of the oracle and the evil eyes come from?

Although it is quite difficult to trace the origin of superstition, we have prepared interesting facts and discoveries. The legend is mainly associated with ancient Greece, but is also mentioned in the Bible and the Koran. The ancient Greeks believed that the Evil Eye posed a great threat to those who were often showered with compliments, especially if they were not so deserved. The ancients believed that this could cause someone to reverse his own luck, becoming overly elated by the superlatives that were showered upon him. In addition, people also believed that the gods used the curse to punish precisely those who were strongly influenced by compliments.

The legend of the Evil Eye and its power are still alive today, even if it is mainly for superstitious reasons. Myths of its origin can be found in every corner of the world. The meaning of the curse might vary a little from culture to culture, but the general idea of it is the same. 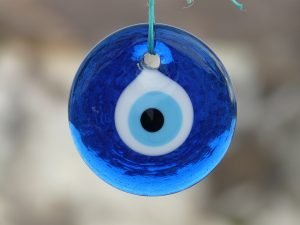 The presence of the Eye of Nazar in modern jewellery

Nazar is an integral part of the jewellery collections of almost all brands. The blue eye can be found in dozens of different variations, constructed from different metals and stones. Apart from being a very significant and well-established symbol against evil forces, it is also a perfect way to add the finishing touch to our look through a beautiful piece of jewellery. It is most common in the form of bracelets or necklaces. The more preferred option is a necklace, as protection is believed to be stronger by wearing the symbol close to the heart.

If you are a fan of simplicity and tradition, you can bet on the standard look of the amulet, but if you are looking for a more broken and different design, you will not be disappointed. Our Nazar bracelet and necklace are great variations on the traditional symbol. We've opted for a fine classic braid for the chain and chain, and the eye itself is set with a large number of blue and silver coloured stones.

Is it appropriate to wear the Eye of Nazar in the form of a jewel?

Anyone can wear the Blue Eye. Nowadays a lot of people rely on jewelry with this symbol because of its aesthetic appearance, even without strongly believing in the urocharacha or the protection of the amulet. Although it originates from certain places, it is not considered a cultural affiliation. If you visit Turkey, for example, you'll notice that the Eye of Nazar is also sold in the form of home and car souvenirs.

Regardless of your religious affiliation, you could wear the Blue Eye whether it is just a fashion choice or has a deeper meaning. The amulet's beauty is complemented by the fact that it offers something for everyone, and its overall concept exudes positivity and protection from evil forces - something hardly anyone would turn down.

Why is cubic zirconia a perfect choice?

The Hamsa symbol - an ancient and beautiful amulet