What is the symbol of Hamsa or also known as the Hand of Fatima?

You may not know its specific name, but there's no way you haven't seen this symbol somewhere. The Hamsa, or Hand of Fatima, is one of the most recognizable symbols that has deep cultural significance for many people in different parts of the world. This amulet is a universal symbol for protection and good energy. Nowadays, it is quite common in jewelry as well as in many other forms of art. The fact is that more and more people are including it in their accessory rotation. However, despite its popularity, there is still a lot of confusion surrounding Hamsa. Can everyone wear it, how should it be worn and a bunch more questions arise on the topic. Let's take a look at this beautiful symbol, starting by learning about its history.

Where does Hamsa come from and what are the beliefs about the Hand of Fatima?

The hamsa originated in ancient Mesopotamia and the Phoenicians, who first used it as a symbol against evil. The first records of it date back more than 1800 years. The Hand of Fatima therefore predates almost all religions known to mankind.

The word "Hamsa" is derived from the five fingers of the hand that represent the symbol. This is directly related to the number "5" in Hebrew - "hamesh". In some cultures, the symbol is also known as the "Hand of Miriam," the sister of Moses who led the Hebrews out of Egypt, and in others as the "Hand of Fatima," the daughter of the Prophet Muhammad. Her full name is Fatima al Zahra. "Al Zahra" means "the shining one" in Arabic. Since Fatima was the personification for kindness and chrism, her sign and hand are tied to faith, prayers and charity.

Is it appropriate to wear the Hamsa symbol?

Whatever your religious and cultural affiliation, the common meaning and understanding is that it is a spiritual amulet that is associated with happiness, prosperity and protection from evil forces. Being present in so many different religions and communities, the Hamsa symbolizes something very powerful but unfortunately not so common nowadays - unity. In addition, the amulet is also a symbol of femininity as the hand is associated with various strong female figures. Over time, it has become one of the most popular and universal symbols that has been worn by thousands of people around the world with different backgrounds and views. The design features in the collections of some of the biggest brands in the fashion industry, only confirming that anyone is free to add it to their personal collection as long as they like it. In the end, the most important thing is what this symbol means to you and how you express yourself by wearing it. 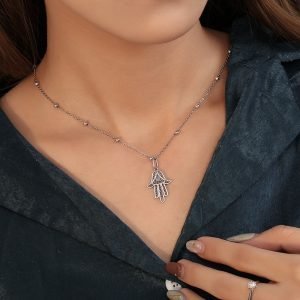 How to wear the Hand of Fatima and what is its presence in jewelry?

Hand pointing down
When the hand points down it is believed that this opens us up to all the goodness and abundance in the universe, welcoming them into our lives. It is also associated with fertility and good luck.

Hand pointing up
In case the hand is pointing upwards, it is an embodiment of a symbol against evil forces. It is taken as a sign of protection that also protects us from our own thoughts of hatred, envy and insecurity.

Hamsa occurs in different variations. Some of them are with spread fingers, others with gathered ones. The variations don't stop there. There is also a wide variety of colours and metals from which the amulet is made. If you are looking for a high quality piece of jewelry that you can wear for many years, we advise you to go for gold or silver. Fatima's hand also finds its place in rings and earrings. Although this is less common, we think it's a great way to remind ourselves of the energy that accompanies this meaningful accessory.

How to choose a piece of jewelry for a loved one?

All about the zodiac - characteristics of the 12 zodiac signs