Moonstone is one of the most mystical and magnificent stones, capturing the hearts of all jewelry and natural crystal lovers for centuries. Imagine the most beautiful and romantic night view you have ever seen. The moon shines brightly, and a veil of beautiful clouds moves slowly past, playing with the sparkling light it gives them... Now imagine this breathtaking sight, brought together in a sparkling jewel. Just like that! A moonstone is a piece of the moon's energy that you can adorn your delicate skin with without costing a fortune. 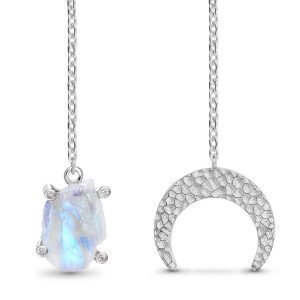 The moon is of course magnificent, but that's not all we can say about it. Besides its obvious and dazzling presence, it has a huge impact on our planet. Its incredible influence on the tides is only a small part of its magic. We would all agree that without her, Earth would be a very different place, and we would hardly be here. It is imperative to clarify that she is also the reason for the name of this beautiful natural crystal. Why do we share this? Centuries ago, the Romans and ancient Greeks believed that moonstones were crystallized particles of moonlight. This is one of the reasons that led people to believe that these minerals contained a huge portion of the moon's positive properties. 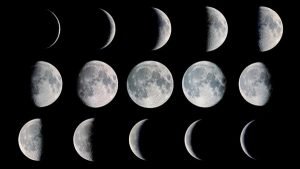 In this article you will learn about the origins, history and properties that moonstones are believed to possess. Get ready to fall in love with this crystal!

Where does the moonstone come from?

Moonstones are part of the "Feldspar" family of minerals - the name of a large group of rock-forming minerals that make up over 50% of the Earth's crust. They can be found in countries such as Mexico, Norway, Australia, Madagascar, Tanzania, Brazil, Germany and even the USA, but the most basic and significant sources of these beautiful crystals are Sri Lanka and India. This is because the more voluminous and flawless stones, which are much rarer and expensive, can be found mainly in Sri Lanka, while India, and more specifically its southwestern part, is famous as the main place from which the so-called "Rainbow Moonstone" originates. 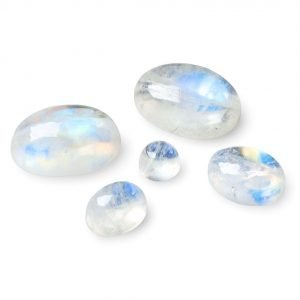 Their history in different cultures

Moonstones have a rich history that can be directly linked to ancient Rome. There, people claimed that the goddess of the moon, Diana, could be seen in the stone itself, and that she would bestow love, wisdom and good fortune to all its owners. There were legends that through her help people were able to make the right decisions when at a crossroads, and a few even revealed their prophetic talents. This was not the only place where the moonstone was considered sacred. Like the ancient Romans, the Hindus also believed that the stones were composed of moonbeams, and that an exquisite and brilliant moonstone was placed on the forehead of the four-armed moon god, Ganesha, who was considered the lord of prosperity, wealth and success. In addition, the so-called moonstone was also known as the stone of love, and as a result it became a traditional wedding gift in India. Both there and in some parts of Europe, myths say that two people wearing it at the time of the full moon were destined to fall in love with each other.

The properties that moonstones are believed to possess

In addition to being amazing rock formations that add grace and splendor to our appearance, moonstones are attributed with a number of other metaphysical positives about the essence of a person. They carry a calming and sensual feminine energy, which is why they are best suited for a female audience, although they do have some involvement in men's jewellery. Being associated with some of the fundamental chakras in our body, the sacral and crown chakras, the moonstone could help to build mental balance as well as make us more open to changes in our lives. It encourages us towards a more positive outlook on the natural process of growth and progress in life, and as a result, we become more intuitive to our daily surroundings.

The moon does not generate its own light, but beautifully and spectacularly reflects that received from the sun. Stones share this property and have been identified as a great element that can enhance our self-awareness as well as aid in our spiritual growth. If you are the type of person who tends to react more emotionally, and sometimes even slightly aggressively towards others, then a natural moonstone is a suitable choice due to its ability to purify the negative energy that often surrounds us.

Some interesting facts about moon rocks

Ladies born in the month of June are lucky enough to have three charming birthstones - Pearl, Alexandrite and Moonstone. However, if you find moonstones as adorable as we do, that shouldn't stop you from adding them to your collection, even if you were born the rest of the year!

Adulariscence is a milky-bluish sheen that is seen beneath the surface of some gemstones. When the stone is turned or the angle at which the light falls on it is changed, it gives the impression of moving similar to the way moonlight reflects and gives a gentle glow to water on beautiful long nights.

Travelling is something that almost everyone loves, as it opens our world view and reveals things we have never seen before - different customs and traditions, different cuisine, the mentality of the locals, nature and what not. We have to agree that most such events do not pass without a certain amount of stress. Crowded airports, flight delays, fear of flying, closed roads, traffic jams - the reasons can be thousands. If you recognize yourself in the lines above, we have good news! Moonstone has been known as the stone of travelers for ages. Accompanied by the energy of the moon, it will be with you to illuminate the path you travel and protect you as you travel at night, especially when your journey is above sea level.

You may have heard that the most traditional gifts for the thirteenth anniversary are lace ones, but if you have decided to gift a beautiful gemstone jewelry to your better half, moonstone and citrine are the two main stones that would be the most appropriate choice for the thirteenth anniversary of starting a life together. Browse our unique sterling silver rings, necklaces and earrings with natural moonstone HERE!

What are the conclusions?

Moonstone jewelry is fantastic, elegant and mysterious. Millions of women around the world are in love with the unique sparkle and energy that moonstone exudes. Whether you're a travel lover, this is your birthstone, or you're just in love with it, we recommend adding this treasure to your jewelry collection!

Tree of Life - symbol of harmony and strength

Symbolism of colored gemstones and their energy

How to choose the perfect anklet?

All about the zodiac - characteristics of the 12 zodiac signs